I was one of the four guest lecturers at Northwestern University– Ken Melvoin-Berg, Faith Kroll, Jim Marcus and myself.  In fact, that infamous fucksaw belongs to me.  I have been too crazy with media interviews, real life duties and such to write a proper response to the events at Northwestern University on February, 21st.  Some discussions I have been having over Facebook prompted me to simply put some of my communication down in a blog post.  I’m tired and apologize for any horrendous grammar faux pas you are about to be exposed to.

I just posted on Facebook a good, thorough explanation of events at NU on someone else’s page and thought it was worth reposting here.  The air really needs to be cleared and the real story needs to be told.

Someone commented in a thread discussing the NU events and this Chicago Tonight interview :  “The radio made it sound like there was some nefarious ‘strip club-like’ activity. Now I’m even more intrigued.”

My response:   “Taken from a post on my page (because I’m too tired to rehash stuff I’ve said elsewhere lol) ‘That stuff was GRAPHIC– no joke! And that was considered a respected academic research film with moaning and masturbating and partners stimulating, etc. No one batted an eye. Our demo was tame compared to that. This is why I don’t understand WHY it’s such a HUGE deal!’” — This was pertaining to the movie that was playing as a REQUIRED part of the class for all 600 students when the four of us walked in the Ryan auditorium. I have no qualms with that film as I’m certain it has played in hundreds of human sexuality classrooms throughout the nation for years (it looked to be a film from the 1970’s).

Afterward, they discussed the commonly held notion that the g-spot and female ejaculation did not exist. We brought a device (strictly for show and tell purposes—we didn’t come there planning to use it. This was my now infamous fucksaw) SPECIFICALLY used for that purpose (female g-spot orgasm and ejaculation) with a near 100% track record. Ken Melvoin-Berg asked the professor if we could demo it on the fly.  After thinking on it a bit, Professor Bailey agreed. He said something to the effect of, “I can’t think of a reason not to do this demonstration, just make sure we tell the students there will be graphic sexual content at the end of the lecture so they have the opportunity to leave.”  We then proceeded to do a 1 hour lecture on other topics before the demo. Mind you, our lecture was an OPTIONAL after class lecture and about 100 students chose to stay— the film, on the other hand, was REQUIRED.

Students were warned of the upcoming graphic nature of our demo about a dozen times and given a chance to leave. The demo took THREE minutes and was a minimum of 30 feet away from students. Faith’s privates were blocked from the audience by Jim most of the time. She was only undressed ONLY from the waist down and they got a flash from a distance—like you’d see in an R rated film. Less than what students would be exposed to with a nude model in an art class.  After we were done, this led to a very productive conversation on female anatomy, orgasmic response, mechanics, orgasm types, etc. (just like the movie had discussed earlier but we felt they left out some very important points which we were addressing with this demo).

All this is relevant to Psych students that may go on to be therapists or sexologists (as was the rest of our lecture that had nothing to do with female sexual response but rather alternative sexual lifestyles both physically and philologically, sexual safety, definitions of non-traditional relationships, etc etc). I DO NOT understand what the big deal was.

I continue to be mystified as to why this is such an issue.  The demo was a teensy part of a greater lecture that covered a gamut of relevant topics.  Those topics aren’t all in textbooks but DO exist in the real world.  This is real world experience all four of us have in both our personal and professional lives (Ken and I most specifically, who cover adult sex-ed as one of the topics on our Weird Chicago Sex Tours and are continually talking to the “average Joe” and sex workers about their private and sex lives).  Some of these students will go on to be psychology professionals.  They WILL treat people in that same REAL WORLD many of which will have elements of kink, female sexual dysfunction, etc in their lives that may pertain to the therapy they are seeking.  So then WHY shouldn’t universities teach real world applications of what is being talked about (and sometimes not talked about) in textbooks? They do for other areas of discipline.

I’m hoping in a way we’re pioneers.  As a society we don’t openly talk about sex enough and unfortunately in a learning environment we’re afraid to as well.  How can professionals in a specific field become thoroughly educated on a topic or conduct research if they are shamed into NOT starting a honest dialogue about it?  I think back 20 years or so ago when the TV show Roseanne aired the first lesbian kiss.  People were OUTRAGED! It was huge.  Homophobia ran rampant in the mainstream media.  Everyone involved in that took a lot of flack.  But you know what?  After the sensationalism died down, it made a difference.  Today, because of that controversy, we are all in a much better place.  We look back at that little kiss and laugh at the big deal we made of it.  With hope, we’ll look back at the fucksaw incident as something silly that propelled us all forward.

I was honored to be involved in this presentation at Northwestern University.  The students were respectful, interested and asked wonderful questions that lead to very productive sex positive dialog.  Since the lecture took place we have had nothing but positive, supportive e-mails in support of both Professor Bailey and ourselves. 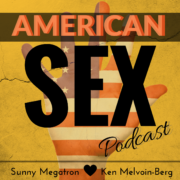