Blog - Latest News
You are here: Home / Kink/BDSM / Beyond 50 Shades / I Don’t Like You Much, Christian Grey

A few days ago, one of the local radio news stations interviewed us for their “50 Shades of Grey” series. I was interested in talking about the book. One way or the other it’s an important book right now. It’s on paper, it’s got a cardboard cover, it’s written with an incessant and continual internal dialogue that makes you want to stick needles in your face, it’s on the bestseller list.

I suppose you can say what you want about how it’s written but it’s turned a lot of heads and attracted readers that significantly better written books couldn’t manage to lure away from back-to-back episodes of NCIS on TNT. I can’t explain why. In many ways, Beta was better than VHS, too. The idea that catches on isn’t always the objectively best one.

As it turns out, we didn’t talk about the book. Which is fine, because, in the book, Ana says the words “Holy Crap” somewhere north of 60 times, which I know I would need to reference and I’m afraid that doing that that might come off as critical. Instead, she wanted to talk about our relationship- one that includes elements of Domination and Submission. We explained to the interviewer that we are not a 24/7 couple, that I am a dom but she is a switch, and that we don’t have a comprehensive contract in place right now like Christian and Ana do, although I have contracts in place with other people.

Do I think that men are superior to women?

My first instinct is to rush in and answer this. Of course I don’t. I’m reminded that I’m a person who admittedly likes to dominate women (and men, too, but we won’t clutter the issue here), beat them, abuse them and make them do what I want. I’m also reminded that Rush Limbaugh himself would not admit to being a chauvinist. Because that’s how bigotry works. It takes a rare self-aware racist, for example, to openly admit to being racist.

So, do I think that men are superior to women?

It would be nice to joke my way out of this but a joke would suggest that I don’t recognize the damage done by chauvinism and gender driven bigotry both in this country and all around the world.

So I step back 25 years and remember my own way here.

I’m a feminist. I get angry when I hear about pay inequities and failures to recognize the equality of women in the workforce. I started an anti-rape group and do pro-bono work for 2 others. All of that has been me since I was younger. So how did I DEAL with this? How did I answer the question to myself?

My ideals and politics are well-considered, well thought out. You might not agree with them but you have to admit that I’ve put in the effort to think about them. You may find yourself on the absolute opposite end of the political and cultural spectrum but you can’t deny that where I am at is a place I got to intentionally and willfully, after a lot of work.

Which is sort of the opposite of my fetishes, I suppose. They pop up in the morning, before I have time to think. I see the beautiful girl lying next to me and all I want to do is to tie her hands down and ride her ass. When I’m tired, dreaming, not thinking at all, that’s who I am.

So here is the whole story, I think. And, of course I could very well be wrong.

We just can’t expect that our answers will be very true, that’s all. And that’s what I tell her. She is welcome to take this fetish- dominating women- and politicize it- to assume that it is the political equivalent to a manifesto on the inequality of women. But when she does that she probably shouldn’t expect an answer that is terribly consistent with reality. That Dom right there is going home to a person he respects more than anything, possibly. That Domme is having lunch with a man she trusts enough to tell everything to. As equals. And that raceplay couple fight really hard, possibly, for equality for everyone when they’re not in bed, fighting really hard to be abjectly unequal.

Of course some it is can fully come from somewhere. Brought up with racist parents? Weak father and Icy mother? Nazi imagery in your Jewish household growing up? Of course it can. But we humans are more complex than that. The problem is that Christian Grey isn’t. He’s precisely as two dimensional as the page he’s written on. He had a horribly troubled youth that drove him to abuse women. How horrible if this book leads to people seeking THAT out.

I don’t now what I expect. I wish I could have talked about something that was actually hot. I wish she had asked me to invent some fantasies that the listeners might find sexy and fun. I wish she asked me to recommend a bunch of really good books that people interested could read and get off on.

I don’t like you much, Christian Grey. And I hate the fact that you’re incapable of answering the questions you should answer. I’m happy that you and I travel in different circles. But the next dull as fuck interview is yours. I want a hot one. 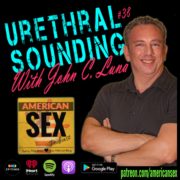