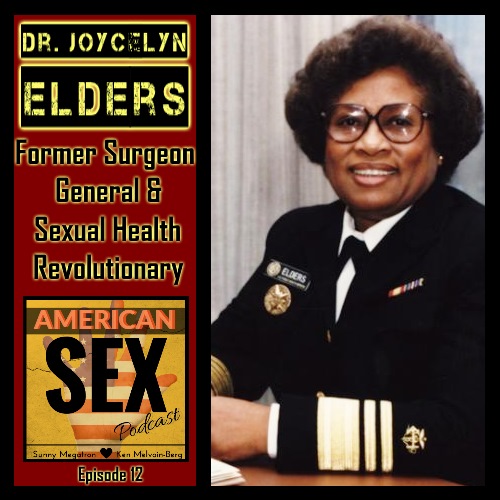 Dr. M. Joycelyn Elders was the 16th United States Surgeon General. She was the First African American & second woman to ever hold the position. Dr. Elders grew up in rural segregated Arkansas and was the daughter of a sharecropper. After graduating high school she earned a university scholarship and found her calling was in medicine. Elders became a well respected pediatric endocrinologist. This is where her passion for comprehensive sex education took root. Pregnancy was dangerous for teenage girls with diabetes and other illnesses and elders recognized the need to give these young women clear useable information on pregnancy prevention and sexuality education. She taught these young women not be ashamed of their sexual feelings but instead have agency over their own bodies and to approach their own sexuality with intelligence and responsibility.

Already controversial for speaking up about comprehensive sex ed, birth control, and supporting the legalization of marijuana, this was too much. President Clinton forced her to resign. Elders went back to medicine and teaching and has since retired. She is still, however, very vocal about the importance of sexuality education.

p.s. Please don’t forget to rate us on iTunes and  Stitcher. And if you really dig us, consider contributing to our Patreon page   All Patreon subscribers get our episodes early for as little as $1 per month. $10 contributors get brand new, monthly content and full episodes made exclusively for Patreon supporters. Thanks!

Special bonus story told by Dr. Elders available to all Patreon followers (even those that don’t contribute– just hit “follow” on our main Patreon profile page for all our free updates and posts!) https://www.patreon.com/posts/hilarious-bonus-14995929