Blog - Latest News
You are here: Home / Sexual Identity & Empowerment / Body Image / What is a Packer? 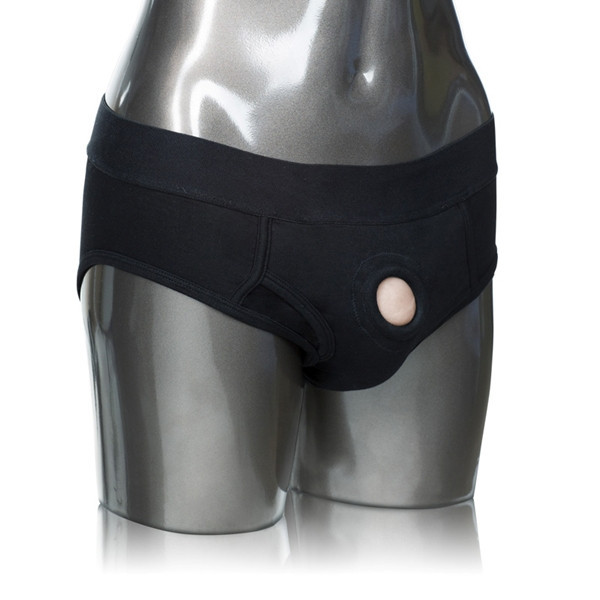 Packing is the act of wearing something in the crotch of one’s pants to give the appearance of a penis. Some people pack with socks or other items found around the home while others buy commercially made prosthetic devices commonly known as packers. Some styles of packers can be used for penetrative sex.

Although anyone can use a packer, they are most commonly used by people without a penis. This includes trans men, drag kings, genderqueer or gender nonconforming people, or anyone who enjoys exploring gender. Packers are sometimes worn for sexual purposes, sometimes simply for gender expression, and sometimes for both. Additionally, some people pack every day while others only do it occasionally. The reasons for wearing a packer are as individual as the person wearing it. For a bit more on the difference between sex and gender check out my article, “Transgender 101: A Starting Point”

It’s not just FtM (female to male) transgender people who wear packers. I once knew a feminine presenting woman who worked in a nightclub. In her private life she recognized gender as a spectrum and celebrated expressing herself at various points on that spectrum. Because she found the nightclub environment objectifying as a woman, she sometimes chose to wear a soft packer under her feminine club attire as an act of silent rebellion. She very much enjoyed the power she felt covertly genderfucking in the presence “bro-dudes” in the club as they were none the wiser.

Are there different ways to pack?

There are two types of packing: soft packing and hard packing. To pack soft you can go the homemade route by safety pinning rolled up socks on the inside of a pair of boxer briefs or make a soft pouch from an unlubricated condom filled with hair gel. Homemade options can sometimes be difficult to work with, however. Socks slip and filled condoms can break at inopportune moments.

Because commercially made packers are relatively inexpensive (it’s common to find them in the $15 range) many go this route. Most packers look like a flaccid penis and testicles (penis only versions are available too) and have realistic details like veins and wrinkles. Because it’s important for packers to look as natural as possible, most are made from soft, pliable material. Although they are available in a large range of sizes, the vast majority of people choose a packer the size of an average penis (4-6 inches) in order to look as realistic as possible. Some people use STP (stand-to-pee) packers that allow them to urinate while standing up.

Because soft packers are flaccid, they can’t be used for penetrative sex. Packing hard means you are wearing a packer that is, or can be, made erect enough for intercourse. When packing for sex you have two options– wearing a pack and play packer or a hard packer. A pack and play style packer is soft for daily use but can be made erect through inserting a rod, inflation, or other means for sex. Those who find pack and play devices cumbersome to deal with, expensive, or lacking in firmness when erect can instead pack hard with firm dildo. While this isn’t ideal for daily wear due to comfort and appearance reasons, it’s a great option if you know you will be having sex.

What’s the best type of underwear to wear with my packer?

Depending on what type of packer you use, you can opt to wear underwear, a strap-on harness, or a hybrid harness that looks and feels like underwear and also acts as a harness.

For packing soft, you can tuck your packer in tight brief or boxer brief underwear. This will be easier with the homemade rolled up sock option because you can pin it in place. Because store bought packers will shift around considerably in regular underwear and can stick to skin causing discomfort, something like this boxer brief harness is a great option. It has a front pouch that holds the packer firmly in place and an o-ring the packer can be pulled through to expose it.

As an alternate some people choose to wear a regular strap-on harness for soft packing. Keep in mind, this can be uncomfortable for extended wear. You can wear regular underwear under this type of harness for added comfort, however, a longer wear hybrid type harness is usually preferable. For packing hard, either of the two harness options available for soft packing will also work.

If the gender spectrum is something you’d like to read more about, here are additional links about being genderqueer plus masculine gender expression and identity:

Explaining Genderqueer to those who are not

The FtMs Complete Guide to Looking Like a Hot Dude

Viagra for Women: Is Flibanserin all it’s cracked up to be?
Scroll to top