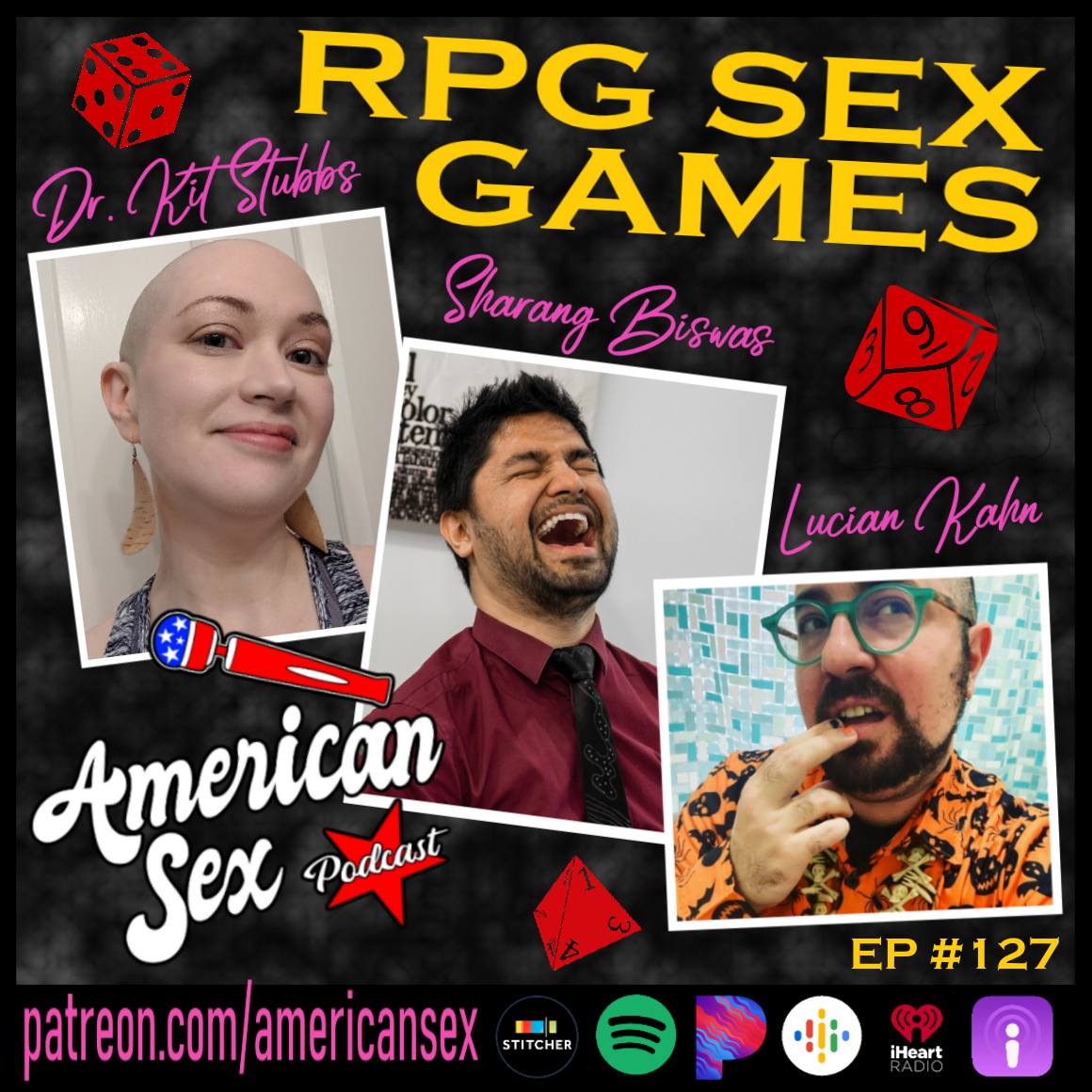 Episode 127 of American Sex Podcast is a gamer geek and sex geek wet dream! We’re joined by Lucian Kahn and Sharang Biswas, the editors and co-contributors of Honey and Hot Wax, an anthology of RPG games about sex, and Dr. Kit Stubbs, Founder of the Effing Foundation for Sex Positivity. We discuss how assigning sexual acts to game mechanics helps normalize conversations about sexuality, reduces shame, highlights the importance of safety and consent, and improves people’s sex lives. They also walk us through a few of their favorite games– some as tame as using subtle sexual innuendo in role-plays between characters and others as wild as requiring real-life jerking off to move the game forward.

Sharang Biswas is a writer, award-winning game designer, and internationally exhibited artist based in NYC. He is best known for his roleplaying game Feast, which was awarded an IndieCade Award, an IGDN Award, was exhibited at the Institute of Contemporary Art in Philadelphia, and was adapted for live, festival audiences. Following that, Verdure, his solo game about witchcraft and salad-making, won an IGDN Award and was exhibited both at the Flow Gallery and the Toronto Reference Library. Most recently, he won a Golden Cobra Award for his LARP The Stars Recall Our Passage. His game design interests are wide: his board game Mad Science Foundation (co-designed with Max Seidman) was published in 2016 by Cryptozoic Entertainment, he has an upcoming trilogy of interactive fiction in Sub-Q Magazine, and he frequently produces immersive and interactive theatre in New York. Sharang writes about games and interactivity for a variety of publications, and teaches and lectures about similar topics at various museums and universities.

Lucian Kahn is best known as the designer of Visigoths vs Mall Goths, a tabletop roleplaying game and dating sim about the conflicts and romances among the warriors who sacked ancient Rome and 20th-century spooky teens, set in a shopping mall in a Los Angeles suburb in 1996. He also designed the ghostly storytelling game Dead Friend: A Game of Necromancy, which was nominated for a 2019 IGDN Indie Groundbreaker Award in the category of Most Innovative. Lucian has designed several games inspired by his Jewish heritage, including the Prohibition-era lady bootlegger singing game Grandma’s Drinking Song (available in Doikayt: A Jewish TTRPG Anthology), If I Were a Lich, Man, and Same Bat Time, Same Bat Mitzvah (finalist for the 200 Word RPG Challenge in 2018). He is a gay-coded villain with a cat, and he is rumored to be the face of Doctor Claw. He is trans, outside the binary nonbinary binary (so, binary nonbinary binary nonbinary), and would describe his gender as “Reverse Baphomet” or “campy vampy.”

Dr. Kit Stubbs is a non-binary/queer/femme maker & entrepreneur who’s more interested in people than in technology. After earning their Ph.D. in Robotics from Carnegie Mellon University, Kit’s light-up dildo prototype “The Hammer” was named the #1 Geekiest Sex Toy by Cracked.com. Kit began speaking on gender, sexuality and sex/tech at events across the US including Arisia, Burning Man, Dark Odyssey: Winter Fire, Harvard Sex Week, Hackers On Planet Earth, the Fetish Fair Fleamarket, and WisCon. Kit is now the Founder and Executive Director of the Effing Foundation for Sex-Positivity (effing.org), a 501(c)(3) nonprofit whose mission is to normalize conversations about sex. Since 2017, the Effing Foundation has awarded over $150,000 in grants to sex-positive artists and educators across the US.